Here’s What You Should Know About Bitcoin

We’ve all seen the stories about bitcoin over the past few years—the triumphs and the pitfalls. For many investors, this cryptocurrency has raised a lot of questions and a lot of curiosity. Is bitcoin just a “scam” that will end in a meltdown? Or does it have the potential to revolutionize financial markets as we know them?

If you’re one of the many who are curious about bitcoin, read on for some of what you should know about the emerging world of cryptocurrency.

Bitcoin Defined
To start, what exactly is bitcoin? In a nutshell, bitcoin is the world’s first digital network. It’s protected by a nearly impenetrable system of global computers (or miners) and built upon foundations in cryptography—which contributes to the fortress-like security of the network. The digital currency that supports this network is called bitcoin, the world’s first cryptocurrency.

Bitcoin is also the first monetary network controlled by users without the need for a trusted third party (e.g., a central bank or financial institution). Transactions are anonymous, can be conducted anytime, and are recorded in an open ledger (known as the blockchain) that can be viewed in real time.

Performance and Risk
Since its inception, Bitcoin’s performance has been extremely volatile, with significant peaks and valleys. How significant? Purchasers of bitcoin at its peak in 2017 (see Figure 1) would have experienced a drop in value of roughly 80 percent over the next year. On the other hand, at current values, the price of bitcoin has since doubled in value from that same 2017 peak. 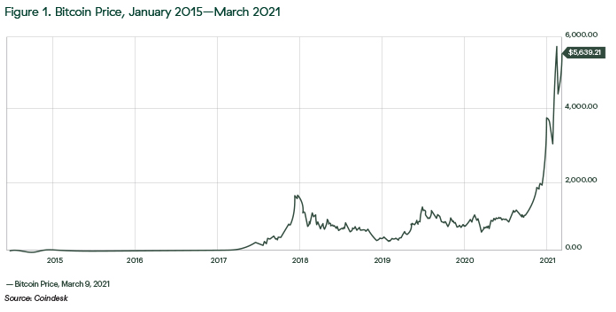 Currently, however, many Wall Street strategists contend bitcoin is in the midst of another bubble. In fact, Bank of America strategists are even calling it the “mother of all bubbles,” based on a comparison of performance with past asset bubbles (see Figure 2). 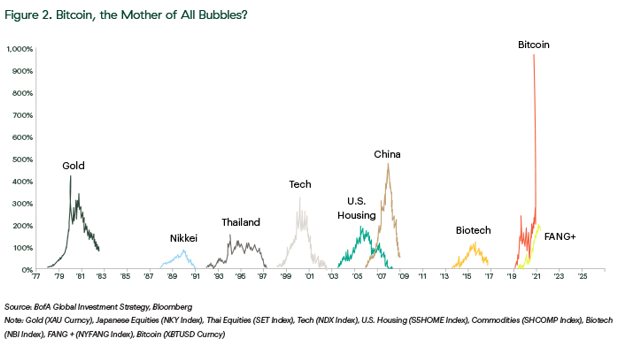 Moreover, studies have shown that despite some closeness in performance over the past year, bitcoin over the longer term has a low correlation with traditional asset classes (see Figure 3).

So, is it bull or bear for bitcoin? Let’s take a closer look at both sides.

The Bull Case for Bitcoin
Decentralized nature. Holders of bitcoin have ultimate control over their money; there is no centralized authority that can issue new currency and no financial institution that has control over their funds. It’s one reason why cryptocurrencies are often viewed as a threat by traditional banks. Although a pure exchange of bitcoin happens between two parties entirely on the bitcoin network (without the need for any trusted bank or third party), there are requirements to utilize a third party (e.g., a cryptocurrency exchange) in order to purchase bitcoin or to translate bitcoin back to dollars or any other currency.

Natural inflation hedge. Upon its creation on January 3, 2009, it was determined there would be a finite number of bitcoin released (see this bitcoin white paper for more information), with the number set at 21 million. That number is programmed into the software itself; therefore, there is no central authority that can decide to issue new currency. If we consider the natural deflation over time in bitcoin and compare it to economies that have faced massive hyperinflation, such as Venezuela, a use case for a currency with no government control appears to emerge.

Store of value. The concept of bitcoin as a store of value (especially in Treasury accounts at corporations) has become increasingly popular. This idea hinges on a belief that bitcoin is a better alternative to dollar-based assets, as well as the risk of a significant devaluation of dollars, based on years of increased money supply.

Institutional support. Many institutions are seriously considering bitcoin as part of their overall asset allocation. MassMutual recently committed $100 million of its general investment fund to bitcoin; Square and PayPal now offer the ability for customers to purchase bitcoin from their apps; and notable money managers, including Paul Tudor Jones, Bill Miller, and Stanley Druckenmiller, have supported bitcoin as part of their investment portfolios.

The Bear View
Intangible asset. Many bitcoin deniers see it as a pyramid scheme or “scam” because bitcoin is an intangible asset. Although we can find a floor value of bitcoin based on the network expenditures involved with creating a coin and the power consumed to do so, it is hard to find the intrinsic value of an asset that isn’t backed by any government and doesn’t produce any cash flow. Of course, the same thing could be said about gold; although it is technically a tangible asset, gold has a certain value because, well, everyone says it does. There are significant expenditures that go into the production of gold, but its supply can be ramped up by producers when warranted, as opposed to bitcoin, where there is a known, finite supply.

Manipulation. Another argument is that cryptocurrencies can easily be manipulated. A recent lawsuit against stable coin company Tether argued that unlimited issuance of Tether coins helped prop up the value of bitcoin in recent years. Although manipulation is a concern, negative Tether news hasn’t dampened optimism regarding the currency.

Regulatory concerns. Due to the decentralized nature of bitcoin, transactions between parties can be done completely anonymously, which has given rise to shady, underground platforms, such as Silk Road, a drug marketplace that was shut down in 2014. Regulators are watching developments in the space closely. A recent Financial Crimes Enforcement Network regulatory proposal would require more information for those sending bitcoin via exchanges, such as Coinbase. Recent allegations against Ripple, a cryptocurrency payments company, say bitcoin should be considered a security. Christine Lagarde, president of the European Central Bank, has called for a coordinated global effort to better regulate the space because of concerns about criminal activity, including money laundering and unauthorized investment schemes.

Ripe for fraud. Because it is unregulated and traded anonymously, bitcoin is ripe for fraud, scams, Ponzi schemes, and other “creative” ways of getting hold of bitcoin or access to bitcoin wallets. Swindled investors often have no recourse for getting their money back, and a lost, forgotten or stolen password can mean loss of access to bitcoin funds forever.

The Bottom Line
Much remains to be seen about bitcoin. Will it displace our old ways of exchanging value? Like gold, is it a viable store of value? Is it a better option than many fiat currencies in emerging markets that are constantly devaluing their currencies? Or is bitcoin the biggest bubble we’ve ever experienced? We don’t have the answers to many of these questions. What we do know is that, despite the likelihood of more volatility, hacks, and scams, cryptocurrencies remain one of the most intriguing technological advances in many years.

If you’re curious about or are seriously considering investing in bitcoin, the bottom line is that you must do your own due diligence, thoroughly research and understand the benefits and significant risks, and be fully prepared to lose your entire investment, before making any decisions. If you can have any questions about Bitcoin or other cryptocurrencies, please do not hesitate to reach out to me. Click here to view my calendar and schedule a complimentary appointment that works best for you!

This article is intended strictly for educational purposes only and is not a recommendation for or against cryptocurrency.